I’ve been renovating one of our family’s rental apartments … for a bit now; it has embarrassingly become my staging ground for learning new things. At this juncture, I needed to replace a flight of 10 stairs that lead to a second-level bedroom area. Pre-cut 3’ southern yellow pine stair treads, with a gentle bullnose already in place, are running a pricey $10 a piece, yikes! That adds up to be fairly expensive in this scenario. So my loyal woodworking guru (and dear friend), Spencer, and I decided to make our own planks: cut, rip, router, and glue-up — cutting the cost in half… raw cost that is. Since time is more flex for us, we’re choosing not to add that into the price tag. This is about LEARNING and DOING. The culture around us is moving so fast and buying into pre-made replaceable objects so vastly. Spence and I are trying, along our path, to slow down, think, do, and breathe.

We started with ten-foot, pressure-treated, 1” thick decking boards, and a ten-foot 2×4. The 2×4 we ripped down and routed thin splines from, in order to join two decking boards together, per tread (our boards of choice are cheaper because their width is half that of the pre-made stair treads; hence all the ripping, cutting, glueing, and clamping needed.) 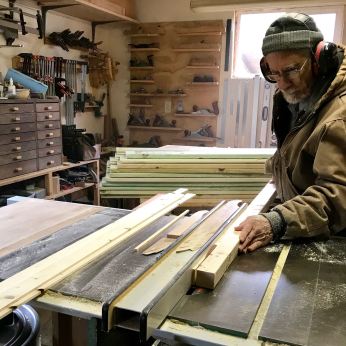 We cut the decking boards in half lengthwise, and then routed each with a matching mid-groove that would accept the spline. We also routed a simple round over on the outer edge for ease on the later installation of carpeting. These three pieces (2 deck boards and 1 spline per tread) we glued and clamped together, before cutting and ripping them to their exact tread length and width.

This took a LOT of clamps and patience, and spread out over a few days.

Installation was a cinch; with countersunk, pre-drilled holes, a bit of liquid nails laid down first to prevent creaks and squeaks, and a robust handful of deck screws, all the old treads were ripped out and new ones put in within a couple of hours. 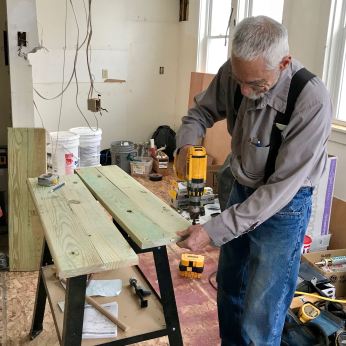 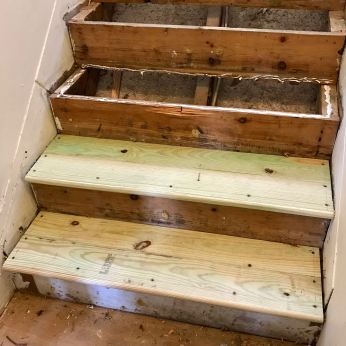 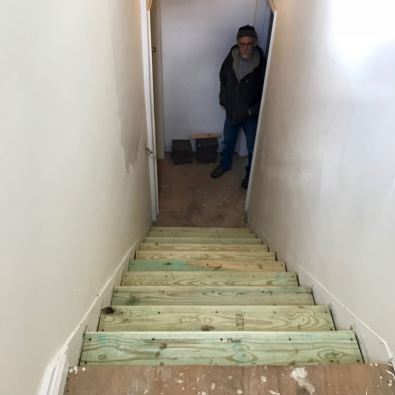