In our ongoing experimentation with new ways to be food sustainable, we’ve begun raising Coturnix quail (Coturnix japonica). Our goal, of course, is to find edibles that we enjoy, and that also have salability to offset the cost of rearing. As an added bonus, these little gems are super cute and offer a songlike trill to compliment the honk and quack of our ducks, and cluck and crow of our chickens. The quail notion took hold this past January, while enjoying a visit with friends out near Buffalo. They wanted to raise quail (for eggs and meat), but suburban zoning and limited living space ruled it out. We struck a deal: having electricity, they would incubate and brood the new quail, when needed; and having ample space and rural leniency, we would build housing and maintain the adult covey.

We decided to keep all the poultry centralized, so this spring up went an addition onto the chicken coops, giving us room for both quail and covered storage. Like the majority of our animal shelters, the roof is opaque fiberglass Fabral to let in natural light. And, since quail need quite a bit of daylight to be healthy and productive, we also made one whole wall out of clear SunTuf panels. 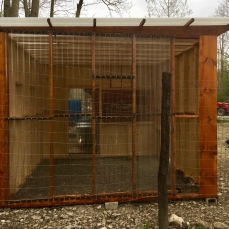 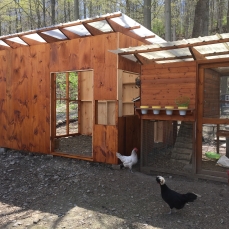 Having raised rabbits for several years, and knowing that quail are poop machines, we modified our rabbit cage systems to fit the needs of quail — keeping things efficient for upkeep and easily cleanable. There are a lot of diy designs out there for wooden structures, but: wood holds moisture/urine (extra smelly), becomes a breeding ground for bacteria (extra unhealthy), is heavy, and is not modular. Like our rabbit hutches, we went with wire cages and PVC pipe. The individual cages are 30”Wx30”Lx11”H. In this way, we can easily get replaceable drop pans from our local feed store. The size is just manageable to lift and empty when full of poop and scattered sand (quail love and need sand baths). At 11”H, the cages are low enough that the birds won’t injure themselves when startled, but we can easily reach in to tend to them. While the cage sides are constructed of 1”x1” wire, the floor (and ceiling) are 1/2”x1” — sturdy, closely spaced for small feet, widely enough spaced for poop to fall through. 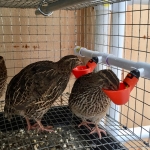 Water has been our ongoing nemesis since moving off-grid. Especially in regard to keeping up with fresh and clean water. For the quail, with so many cages and lots of mess, we’re trying out chicken cup waterers with nipple valve releases and chicken cup waterers with float valves. The nipple valve waterers are from a company called Beaktime — great quality and the bigger birds do well with them. The float valve waterers are from China via Ebay — they’re pretty chintzy, but the younger birds need them as they aren’t strong enough yet to hit the nipple valves. Both types of drink cups are fed via a gravity system, with a 15-gallon tank mounted on a platform near the roof of the quail coop. We harvest rainwater for our chickens with a manifold rain barrel collection system. This won’t help us directly with the quail since their water storage barrel sits higher than the gutters! Rather than lugging buckets precariously up a ladder, we simply connect a pump that runs off a battery-powered electric drill and sucks water up via a couple of garden hoses. Easy peasy.
This will serve us well for three seasons, until the big winter freeze hits again. Then it will be back to individual crocks in each cage that will need to be changed out once or twice a day — argh!

Here’s a video of a few quail enjoying some refreshment from the Beaktime cups:

Quail wave their heads back and forth when eating, spreading more feed on the ground than they eat — LOTS of waste. We modified a number of designs seen on YouTube and made external feeders that are nearly zero waste. They’re constructed out of 4″ Schedule 30 PVC, so cheap and easy. And, no opening cage doors to feed each day! We cut 2″-square holes in the front of each cage for the quail to poke their heads through, into 1 1/2″ holes in the PVC pipe. The back-side of the pipe has a long opening for filling, and we added edge protectors to the openings so no wee quail heads get snagged on the cut wire.

Coturnix quail eggs present in a wide range of color patterns, from snow white to fully brown, but more commonly are tan and dark brown speckled. Without the advantage of artificial lighting we’ll be looking at about 200 eggs per year, per hen. So far we’ve hardboiled them, scrambled them, fried them and pickled them. They’re mild and creamy and higher in vitamin/mineral content than others. Pickled are my favorite … with beet juice and juniper berries … yowza are they good on a fresh mesclun mix salad and homemade dressing!! 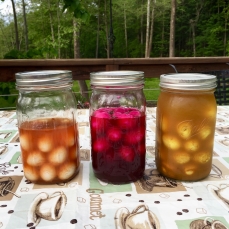 Plain and simple — we eat meat as a protein source and we ENJOY eating meat. Our preference is to know where it comes from and how it was raised and cared for. I like being an integral part of the process of providing food for our table. It’s been two months since Adri and Jim brought the first hatch to their new digs, and two weeks since the second batch. We now have 16 cages with three hens and one cock each. We’ve been through one culling of cocks from the first hatch and will do a cull from the second hatch next week. With every incubation batch you’re likely to get about 50% male quail (cocks). We keep just one with every 3 – 4 hens. This means that with each brood a certain number of males will end up in our freezer … and then on our table. 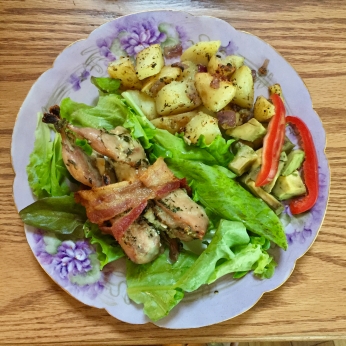 Thus far, it’s felt worth the effort. Culling is simpler than anything we’ve done on The Menagerie to date, the meat is versatile and tasty, the eggs are elegant and precious. At the end of a long day Laura and I sometimes make deals and bets with each other to decide who will go out and put which animals “to bed.” The quail, I offer to do. They are quite simply: sweet and calming …